How to Make the Best Festive Appetizer: Beef Salad

A Romanian Salad, French in Name and Historically Having Almost Nothing to do With What’s in the Title!

If it sounds a tad confusing, here’s the disambiguation:

Romanians like many things but absolutely LOVE food; therefore, they create dishes that everybody loves to try and often become traditional foods for holidays. Beef salad is an appetizer that is always present on the Christmas, New Year’s Eve and Easter festive table!

The story of Boeuf Salad, as we call it, has been originally a simple “game in mayo” dish about two hundred years ago. In time, the pheasant was replaced with beef and the French name (Boeuf) stack for unclear reasons.

It might have to do with French being largely spoken among Bucharest’s high society in the twentieth century’s interbellum period. In that era, Bucharest, the capital city, was frequently called Little Paris.

Today, beef salad has any meat in it and I usually prepare it with chicken.

Now, because Romanians are also incredibly superstitious, there is a strong argument against eating chicken on the first day of the year. Unless you want to be going backwards the entire year, sort of like chickens scratching the ground and thus creating the back-walking illusion!

No, we don’t want that! This is why we eat fish on January 1st. So that we are slick and quick in our endeavours like a fish in the water!

If the argument is not strong enough, you can still use chicken in your Boeuf, but after the year we’ve had, are you really willing to take the risk?

Boeuf salad is mainly an appetizer made with boiled vegetables (potatoes, carrots, celeriac, peas, parsley) mixed with pickles (gherkins, bell-peppers) and a dollop of mayonnaise.

The best part of making this salad is that anyone can release their inner artist and go crazy with decorations. I like to use halved olives, boiled egg whites, finely cut pickles but the list does not stop here. Be creative; it’s fun!

What is important is that a large plateau of this appetizer is always present on each Romanian festive table and every New Year’s Eve dinner starts with it.

In any other year, Romanians would go crazy partying until the sun would come up on January first. The restaurants, hotels, boarding houses and any other place that can hold festive parties would be fully booked since August.

In the crazy year of 2020, for the first time in our recent history, this will not happen. It sounds surreal and completely alien. But it does not mean that we won’t set the table in the evening, imagine we’re at a monster New Year’s Eve party, the music is blasting in the speakers and the fireworks will go any minute above our house!

We better make it be the last time as well! Nobody will forget 2020, but we should learn something from it and never allow a repeat! 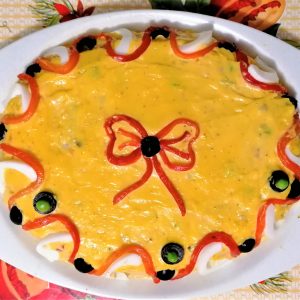 All the ingredients I use are organic. Beyond my refusal to eat pesticides, I want to feel the real taste of food, something to remind me of my childhood. If you use frozen peas, boil them separately for 2-3 minutes and mix them with the rest of the vegetables. You can mix the boiled egg yolks with the vegetables before adding the mayo. Bon appetite!
Keyword Beef Salad

Any cookies that may not be particularly necessary for the website to function and is used specifically to collect user personal data via analytics, ads, other embedded contents are termed as non-necessary cookies. It is mandatory to procure user consent prior to running these cookies on your website.