It is impossible to visit any part of Greece without eating at least one traditional Greek Salad. I’ve had my fill almost everywhere, but I liked it better in Santorini. Not because the recipe was any different, but because the company was excellent!

I was spending one afternoon idling around the streets of Santorini with my then my boyfriend Hotass (not his real name, just a nickname he acquired on a funny occurrence!)

We stopped at a tavern for dinner in the evening while admiring a fabulous Mediterranean sunset over the Santorini Caldera. An exquisite view from a considerable height and the remainder of a massive volcanic eruption that shaped this circular archipelago.

While mulling over the possibility that the said eruption might have sent the famous Atlantis to the bottom of the sea, Hotass admitted that he had no idea about Greek foods, so it was down to me to order what I thought was worth experiencing for the first time. A virgin to moussaka and tzatziki, my American born and bred boyfriend licked his fingers after each course and proclaimed the Greek cuisine divine!

The truth is, you can’t go wrong with things that many people grow in their gardens. And you don’t have to physically be in Greece (even if it is preferable, being a holiday hot spot for all the right reasons!) to make a simple, filling, healthy and delicious starter or side dish such as this traditional Greek salad.

For me, it turned countless times in a whole meal, especially in the summer months when I go for anything light, healthy and easy to make.

Before you start preparing your Greek salad, here are a few things that could help you understand why the Mediterranean diet is regarded as one of the healthiest ones.

The latter is also the maximum daily salt intake recommended for an adult. Keep in mind that the feta cheese is salty too, and with just one (healthy!) meal, you can easily exceed the suggested limit. Moderation is key!

A sprinkle of dried oregano

A dash of ground pepper

A tiny bit of salt (there is plenty in cheese and olives!)

How to make Greek Salad:

It is not exactly rocket science. Just wash and dry the veggies, slices them, add the olives and place them all in a large bowl. Add the salt, pepper and a little olive oil and mix.

Fill two plates with the veggies, then place the slices of cheese on top, sprinkle the oregano, pepper and the rest of the olive oil, and that’s it. Your salad is ready! Colourful, healthy and I’m drooling! I’m off to the kitchen; I have just sorted my dinner! What about you?

Bon appetite or, as the Greeks would say, Καλή όρεξη [Kalí órexi]! 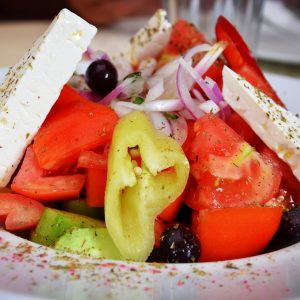 I hope you enjoyed reading this recipe and the little history! Would you mind sharing the love by saving a pin to your dinner boards? Thank you!