The Taste of Childhood

When I made a biscuit salami for the first time, I was eleven years old. In the good old days, the parents would go to work, and the children would spend the three months long summer holiday at home doing whatever they wanted.

We would mostly go outside to play with other kids (we had a key we wore on a necklace), come back for lunch (yep, we were taught from an early age how to heat a soup without burning the house down) and go back outside until the parents would return from work.

To a tablet/mobile phone/ PC /console owner kid today, it might sound alien, but to us, it was immense radiation-free fun (until Chernobyl happened!)

On one sunny summer day, I announced to my younger sister that we were making biscuit salami for breakfast, but we should not eat anything sweet on an empty stomach. Instead, I cut (butchered, actually) a giant watermelon so we could start with a healthy breakfast.

Then the biscuit salami was ready, and I was quick to skip the refrigeration part. I stuffed my face, as usual with this dessert, to the brink of explosion!

Of course, my pre-teen body did not need much to react to the stupid combination, and indigestion struck.

It was so annoying to hear the other kids playing and having fun outside while I was in bed in agony, close to passing out and with a nasty tummy ache!

I could not eat anything for two days, and I decided the watermelon was the culprit, for being such a heavy fruit with lots of sweet water in it! So I did not eat watermelon for eight years after that moment.

Of course, biscuit salami saw many repeats in those eight years, with perhaps less greedy gulping. What can I say? I was wise from a young age (NOT!)

I’m telling this story more as a precaution: it might be tempting to exaggerate because this dessert is so incredibly yummy, but it would not be a good idea. A couple of slices with a cup of steamy coffee are just heavenly! Luckily, my wiseness level has improved slightly with age…

In my adult years, the gears shifted a bit, of course. I would eat watermelon on any occasion. But I still make biscuit salami at least once a year, especially since a little and enthusiastic helper loves to do the step I find the most tedious: crushing the biscuits.

In time, I made some variations of mom’s recipe. I added butter or milk, which changed the taste a tiny bit. To this day, I still prefer the simpler version.

In my opinion, rum oil extract and cacao are the primary flavours. I always replenish my stack of rum and vanilla oil extract whenever I visit Romania. If you cannot find the same thing, use rum extract or rum essence (perhaps you will need an extra spoon since it is not as concentrated as the oil extract).

This post contains the simple, Romanian version of the biscuit salami recipe, as it was handwritten in my mother’s book. The same book where I found this incredibly successful apple cake recipe.

In Italy, a similar variant of it is called Salame di cioccolato (chocolate salami), and it is the traditional Christmas and Easter dessert in many regions of the country. The recipe is slightly different, and it may include raw eggs.

There are too many health restrictions on consuming raw eggs, and this is another reason I go for the easy method.

Since all the recipes I’m publishing here are specific to a different county, I usually end the article by wishing you bon appetite in the respective language. Today, it’s time for your first Romanian language lesson: Poftă bună, everyone!

This recipe contains allergens! If necessary, replace the nuts with any dry fruit. 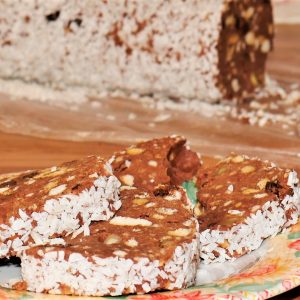