A Tradition In Name Only

As a migrant who settled in the UK, of course, I got to learn and appreciate local traditions. But I remember staying away from mince pies for several years. The reason? I did not get why a meaty thing would be placed in a pastry sheet and have sugar sprinkled on top! My prejudice wilted when I decided it was time to do some research and get to the bottom of the story!

It turned up they were only called mince pies because, historically, they would contain minced meat (mainly mutton). In time, dry fruits would replace the meat, and people would start adding booze to the fruity filling. It would not be the only dessert that uses alcohol, which enhances the taste and preserves the fruits in this case.

Mince pies seem to have made it to Britain in the middle ages, brought by the crusaders from the Middle East. At the time, they were filled with meat, fruits and spices and were not a dessert but the main course. Fibre and protein are not an ideal combination for the human liver, but medieval medicine was not advanced enough to acknowledge this fact.

The most extreme times this traditional pie had seen was the brief kingless period England had known in the seventeenth century. Oliver Cromwell went to the limit, not only banishing pies in an attempt to make the population thrifty but cancelling Christmas altogether.

He was no fun! And he had a warty nose! I saw it in Horrible Histories!  (I’m just being a sarcastic bully at the expense of a dead historical character, I know!)

Rightly so, England returned to its monarchic tradition that also meant the reinstatement of Christmas and the continuation of pie baking.

In time, mince pies have seen changes but have never disappeared from the traditional festive table.

Today, the entire English-speaking world would have them at Christmas, filled with a delicious and notably fragrant combination of booze-soaked dried fruits and spices still called mincemeat!

There is even a superstition saying that if you eat one each of the twelve days of Christmas, you’ll be lucky the entire following year! I have to make an effort to get mine to last this long; otherwise, I’m busted!

Given that the past two years were the weirdest in our recent history, I don’t know who would be willing to take a chance! 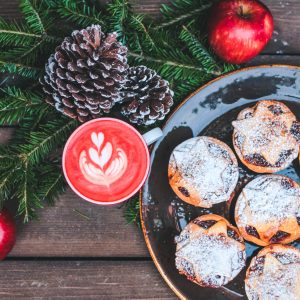 Mince pies can be stored in airtight containers in the fridge for up to a week or frozen for maximum three months.  In general, I use organic ingredients. If it is not always possible, at least the oranges should be organic to avoid ingesting pesticides and wax.
Keyword Boozy Christmas treats, Christmas baking, Mince Pies, Mincemeat for pies, Traditional British Mince Pies

A Tradition In Name Only