Mom’s walnut snails recipe is an adaptation of the Nussschnecken desert which is basically a sweet bun of Saxon origins, filled with nuts and cinnamon. Schnecken is the German word for snails, which suggests the unique shape of this finger-licking delicious walnut filled treats.

Given Transylvania’s Saxon heritage, our cooking and especially baking have seen a tremendous German influence over the centuries.

When I was a child, mom’s best friend was a German lady who used to bake weekly. She would always invite us to keep her company while she was dancing between the island in her massive kitchen and the oven, mixing ingredients and filling tray after tray. She was not dancing-dancing, but the elegant way she moved, her precision and amazing skills made it look like dancing in my awe-filled eyes.

Of course, the good lady always shared her recipes and many baking secrets with mom, who later shared everything she’d learnt with her kids – my sister and I.

Essentially, my mom had learned how to bake from Frau Francu – that was the lady’s name. Mom filled her first recipe book with mostly German recipes during that time, such as this delicious apple cake, one of my favourite desserts for special occasions.

I used to sneak into Frau Francu’s large kitchen and count the seconds until the first batch of whatever cake she was baking would come out of the oven.

Because I was born without patience, I could never wait for the cakes to cool properly. I would always pinch at least one and run outside to cool it in the wind (lame excuse, I know!)

I fondly remember how Frau Francu would bake four or five different and complex cakes in half a day every Saturday. She would always giggle as I was sneaking in to pinch samples from her trays. The lovely lady had no children and loved to see me around, as impish as I was.

If I regret one thing from those good old times is that whenever Frau Francu wanted to teach me German, I would bolt out the door pretending that I needed to play in her vast garden.

I regretted that the minute the Romanian Revolution of 1989 changed our contemporary history and freed our country of communism. I was very young, still a teenager, but I would have had a chance to move to Germany a few years later and radically change my life.

Now, a few decades on, the only thing that is still preventing me from doing just that is again the fact that I can’t speak German. Although I am fluent in five other languages, I’ve lost the train to learn what should have been the most important foreign language to me.

Ironically, now I have the liberty to choose where I want to live, but the language barrier still makes the choice difficult. Ugh, one day …

The adaptation mom made of Nussschnecken means that instead of getting the giant, fluffy snails the size of a dessert plate, she would make them smaller and would not smother them in sticky sirup, so we could eat them the same way we’d eat biscuits.

I would always bake these treats around the festive winter season or at Easter time and all family anniversaries. We can never have enough of it!

Ingredients for the dough

2 organic egg yolks (you will use the whites later, for the filling)

A pinch of salt

Ingredients for the filling

2 egg whites + a pinch of salt

The dried yeast requires a warm temperature and time to activate. For this recipe, use the lukewarm milk to activate the ammonium bicarbonate first, then pour it over the yeast mixed with sugar and one tbsp of the flour quantity. Cover with a dry towel and leave aside for about 20 minutes. When the time is up, you will observe that the yeast had dissolved and the pre-dough had increased in volume.

Secondly, any dough that uses melted oils needs refrigeration to solidify the oil molecules and make it easier to roll the dough. When your dough is ready, cover it in cling film, press it down to allow a quicker and thorough cooling and place it in the fridge for about 20 minutes. Meanwhile, you can prepare the filling.

As the title suggests, this recipe includes allergens. 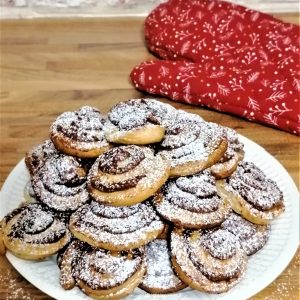 The purpose of using ammonium bicarbonate in this recipe is to make the dough tender. You will observe this if you keep the walnut snails in an airtight container or on a large plate covered with cling film for a couple of days before serving. Enjoy!
Keyword desserts, easy recipes

This website uses cookies to improve your experience while you navigate through the website. Out of these cookies, the cookies that are categorized as necessary are stored on your browser as they are essential for the working of basic functionalities of the website. We also use third-party cookies that help us analyze and understand how you use this website. These cookies will be stored in your browser only with your consent. You also have the option to opt-out of these cookies. But opting out of some of these cookies may have an effect on your browsing experience.
Necessary Always Enabled
Necessary cookies are absolutely essential for the website to function properly. This category only includes cookies that ensures basic functionalities and security features of the website. These cookies do not store any personal information.
Non-necessary
Any cookies that may not be particularly necessary for the website to function and is used specifically to collect user personal data via analytics, ads, other embedded contents are termed as non-necessary cookies. It is mandatory to procure user consent prior to running these cookies on your website.
SAVE & ACCEPT
error: Content is protected !!
Skip to content