Romanian Cozonac: The Best Treat on Your Festive Table

A Culinary Delight with A Long History

Cozonac is a beautiful festive delight I grew up with as a child in Romania. Each major holiday mom would bake the best treat there could be. Be it Christmas or Easter, our house would smell awesome, filled with delightful flavours escaping from the oven. And I would wait impatiently for the festive dinner to finally savour the best treat created by humankind!

The ladies of Romania, especially in the countryside, would take at least half a day before a holiday to bake lots of cozonaci (plural [cozonach]) for the festive dinner, and mom is still not an exception.

Based on bread baking and using a raised dough, cozonac (kozunak in Bulgarian, or Panettone in Italian) has seen a long history, going back to pharaohs’ old times.

Apparently, the ancient Egyptians used to make a fermented dough sweetened with honey they would bake in ovens, as shown in some wall paintings.

The ancient Greeks also made a honey-sweetened bread they would fill with nuts and call plaukos.

The more advanced and ever so posh Romans have improved the recipe by adding eggs, butter and dried fruits.

In the Middle Age Europe, dried fruits would mostly fill the sweet loaves of bread because they would last longer.

In England, there is a mention dating from 1718 of a sweet bread filled with dried fruits and baked in long, thin loaves, which is the shape primarily used today.

In France, the famously infamous Marie Antoinette remained in history with her uninspired advice to the poor to eat brioche if they could not afford bread. The said brioche seems the be our same delight. Unfortunately, she paid with her head for her lack of touch with her country’s harsh reality.

By the nineteenth century, cozonac became a traditional holiday treat around Europe with slight variations of the recipe.

To any Romanian, the presence of cozonac on each festive dinner table is an absolute must. Although like anything else, it has in recent years become a commodity sold in supermarkets, the majority of Romanian ladies would bake it at home using different types of filling, from walnuts to poppy seeds, Turkish delight or chocolate. These last three ingredients also make a perfect substitute for nuts if you have a nut allergy.

To me, cozonac is the best festive treat there can be, and I can never get enough of it! You can offer me the most elaborated sweet made by the most in-demand French pastry chef at a fancy king’s court, and I would always choose cozonac! Nothing beats the aromas that fill the air when you bake it and the taste offered by the combination of spices used in the preparation! 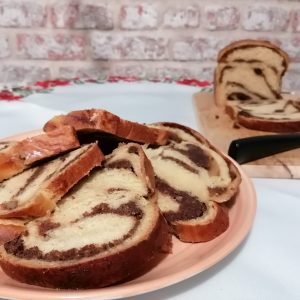 For the nut filling

Method for filling and bake cozonaci